What Prairies Are Now

Less than 1% of the original extent of the prairies remains, and all of this is cut into tiny parcels.

Once the European immigrants overcame their shock at the sight of the ocean-sized seas of grass upon their arrival in the late 18th and early 19th centuries, they quickly realized that the land was incredibly fertile and perfectly suited to agriculture. Quickly dispensing with the native peoples already there as well as the large mammals — principally bison and elk — upon which they depended, the settlers set about plowing up the grasslands.

This task was immensely accelerated by John Deere’s invention of the steel plow in 1837. Within only a few decades, nearly all of the original prairie had been broken. Where not used for crops, the land was converted to roads and towns. Over the past several decades, suburban sprawl has consumed the majority of the remaining lands.

Aside from a few larger prairies like the Flint Hills, the Tallgrass Prairie National Preserve,Konza, nearly all remaining prairie parcels are quite small — typically a few to perhaps 100 acres. These remnant prairies are separated by cultivated lands, roads, and towns. With the fossil-fuel dependent farming practices used since the mid-20th century, the cultivated lands are now nearly as sterile as asphalt. Each remnant has become essentially a genetic island within a huge archipelago of similar islands.

Here for example is the land cover patterns for Kansas, created by the Kansas Applied Remote Sensing Project from satellite and on-the-ground data. Whereas once the entire state would have been light green (grasslands) with lines of darker green (woodlands along waterways), now the light green is split into tiny chunks. 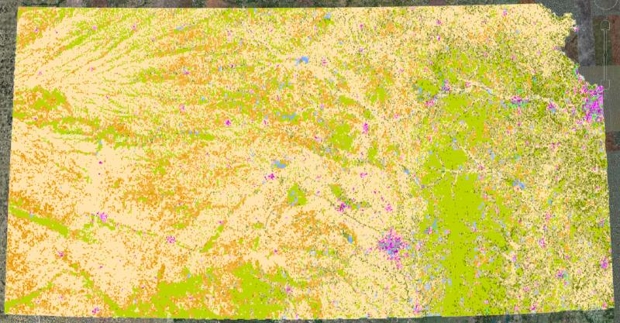 And here is a closeup of the area just adjacent to the Tallgrass Prairie Preserve on the north, showing how the prairie remnants stand isolated from each other: 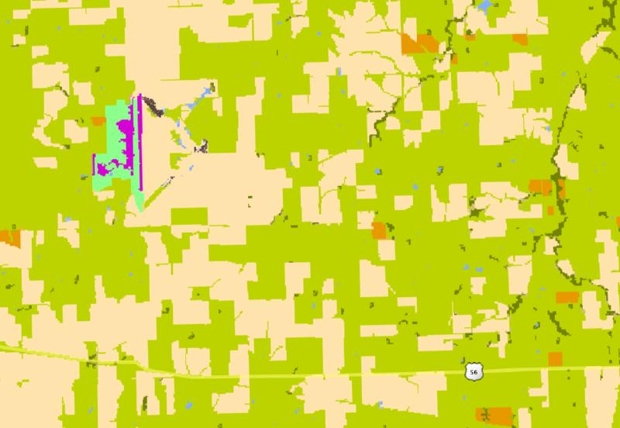 It’s important to note that these light green areas are grasslands not necessarily quality prairie. Most grasslands have heavy infestations with various invasives (particularly red cedar trees, hedge, and various forms of woody shrubs), are over-grazed and stressed, or have been planted with nonnative cool season grasses. The amount of actual high-quality original prairie in these maps is vanishingly small. For instance, a detailed inventory of five counties in Kansas found the most remaining “high quality” prairie found in one county was a mere 0.5% of the land, while the other counties were substantially less and one had no such prairie left at all.

As a result, the available range is simply too small in any one area to support large herbivores like bison or emblematic birds like prairie chickens. Wind pollinators have some chance of exchanging genes, but the crucial microbes and fungi in the “rhizosphere” are cut off entirely. Many endemic prairie plants are endangered, while he wholesale habitat loss imperils many other popular “charismatic megafauna and flora”.