Information about the origins and nature of the prairies prior to the mid-19th century.

Following the end of the last ice age some 12,000 years ago, an incredibly rich ecosystem of grasses and forbs developed in the rain shadow cast by the Rocky Mountains. The precipitation gradient increases moving west to east, producing a gradual transition from short-, to mixed-, and then to tall-grass prairies: 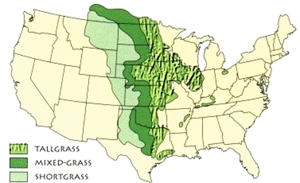 The exact composition of species and their growing habits varied within this general trend depending on slope, soil types, and drainage. These prairie ecosystems were also heavily dependent on the critters living there — large migrating herbivores like bison and elk, small burrowing mammals like prairie dogs, and of course the vast groups of pollinating insects and birds.

These grasslands remained largely free of trees and shrubs partly because of the grazers but mostly because of periodic fire, started by lightning and later by native peoples.

One of the key characteristics of prairies is their deep soil — usually over two feet deep and up to five feet deep in some locations. Dense networks of grass roots extend 7-10 feet into the ground and “bury” carbon simply as the roots die and turn over. Mound-building ants mix and aerate the soil as they build their tunnels, which brings up necessary inorganic nutrients (potassium and phosphorus) from the subsoil. When a prairie burns, nitrogen in accumulated litter is oxidized, to be subsequently incorporated back into the soil through nitrogen-fixing bacteria in the root nodules of prairie legumes. As a result of all these processes, prairie soils contain much more organic matter than do forests — 120 tons/acre vs. 70 tons/acre.

Unfortunately for the prairies, the very richness of these soils is what led to their conversion to agriculture during a geologic blink-of-an-eye when European settlers arrived.